December 29, 2019
...But at my back I always hear  Times winged chariot drawing near...                                                                              --Andrew Marvell Part I, Early 2016: An older gentleman walks three miles around our neighborhood every day -- rain, snow, sleet, or occasionally, shine. Stickman, we called him until I asked his name, dubbed for the large stick he carries swinging and twirling first in one hand and then the other, back and forth as he walks, to get an upper body workout along with his daily constitutional. I see him often from my office window, and I smile. He's become part of my life, my daily routine, a bright moment in generally an otherwise gray and stress filled day. I admire him for his perseverance. Three miles a day, every day. He tells me that he used to run, but his knees eventually gave out, so now he walks. He has aged noticeably in the eleven years we've lived in this house. He walks more slowly, swings the stick less st
Post a Comment
Read more

Prologue to The Last Time

December 28, 2019
I started a post titled The Last Time  in the spring of 2016. I wasn't happy with the ending. It was too glib, but I didn't know where to go with it, so I pressed pause on publishing it. Now almost two years of loss later, I'm ready to write the ending. But first, a glimpse into my life since that spring, and some insight into why I've reached a place where the ending will probably write itself. In late March of that year, my older sister was diagnosed with pancreatic cancer, and my life fell apart. I sobbed and sobbed wondering how I could possibly live through saying goodbye to my first friend in life -- and turn into the oldest sibling -- within two to six months. The irony of having just written a post about the "last time" wasn't lost on me. I couldn't stand to even think about it.    We received semi-good news though -- her tumor is a neuroendocrine pancreatic tumor, which, at the time, meant a prognosis of three to ten years, based on therap
Post a Comment
Read more

February 25, 2018
I found out yesterday that my long estranged brother-in-law passed away about a month ago. Services were private -- so private that his own children were excluded. As our family has coped recently -- and continues to do so -- with death and dying, this one seemed like it should be a simple one.  He was an alcoholic. And he was a mean drunk. He was a verbal and emotional batterer. He didn't pay child support, forcing my sister to raise two children on one salary, a difficult task for a teacher. My sister suffered and the kids suffered.  He would promise the kids the moon and deliver nothing. Nephew had to learn at a very young age that not only would Daddy not get him the fantastic toys he promised for Christmas, he wouldn't even show up. The second part was harder on the crying little boy than the first.  Eventually Niece One and Nephew wanted nothing to do with him until he sobered up. They were tired of the emotional abuse and verbal tirades; they were tired o
Post a Comment
Read more

The most difficult writing assignment of my life 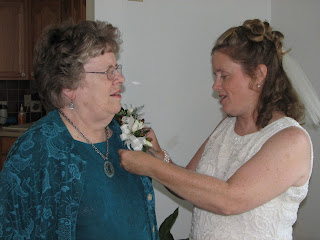 I found this picture while looking for photos of Hubs's sister who has ALS. We are up against it this year, there is no doubt about it. I'm raising my fist to the heavens saying, "I'm strong enough. I don't need any more of 'that which doesn't kill you' nonsense." But even so, I was grateful to find this beautiful photo of just the two of us. "'Tis an ill wind that blows no good." I am here to find a poem about grief to read at Hubs's mother's funeral service tomorrow. But I've been meaning to post this for oh eight or ten weeks now. As I write this, I lost my mom almost ten weeks ago. You might as well have ripped my heart out of my chest. To feel grief in every cell of your body -- to actually feel it in your cells -- the pain is indescribable. I had 58 years with her. But it is never enough.  And now...my other mom. My son has lost both his grandmothers in the space of nine weeks. To the day. Almost to the
Post a Comment
Read more

A Rose By Any Other Name

September 20, 2016
Objectionable language alert. This post contains objectionable language. Because it has to. "Nigga." All but the most ignorant among us, more and more of whom are slithering out from under rocks these days, know that "nigger" is a word that needs to be erased from the English language. Its use has always been to dehumanize people of African descent so that horrendous things can be done to them. Things like slavery and all the evils that brought: living life as a possession, to be bought and sold; dying by the thousands on voyages across the Atlantic, bound together by chains, never to see their homes or their families again; whippings and beatings and all forms of torture; families torn apart -- mothers ripped from their children, husbands ripped from their wives, siblings ripped from each other; malnourishment and starvation; and hangings -- just to touch on the tip of everything that was wrong with slavery. And rape. What female slave was never raped by a
Post a Comment
Read more

Eighteen and Life to Go

August 28, 2016
Eighteen years ago today, I woke up fatherless. My dad, age 64, had passed away the night before while I sat with him in the hospice room at the hospital, after a year-and-a-half battle with Merkle cell cancer. I don't know what drives this universe. I understand the physical forces, but there is more to it than that. I don't believe in an all-knowing and all-caring God. But there is something . There are so many unexplained events around his last week that I can't believe there isn't a force -- a something more than stardust and dark energy from a big bang a long, long time ago. I had planned my first vacation in more than a decade several months before he began the final decline -- a four day trek through the wilderness in New Hampshire with no access to the outside world once we started in. I was torn about going or canceling, but decided he would want me to go and enjoy being free in the mountains after spending so many years under the controlling fist of my e
Post a Comment
Read more 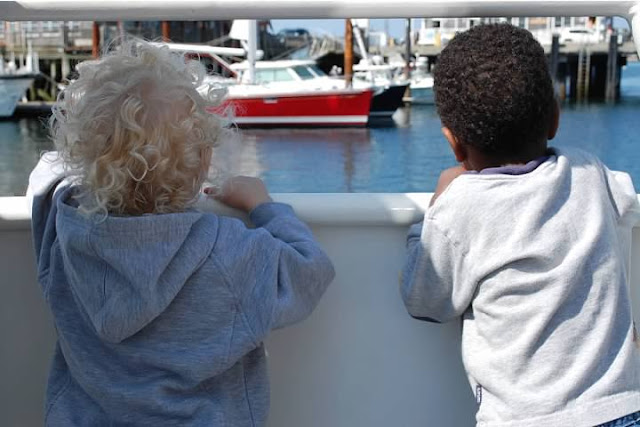 I see two kids and a RED boat. What else do you notice about this photo? 1. It Was the Milkman I am one of four siblings. Three girls with blonde hair and one red-headed boy. Not strawberry-red hair, not carrot-red hair, but fire engine red hair. When we were out and about as a family, we were constantly stopped by complete strangers. "Where did you get that RED HAIR?" people would exclaim. My mother would use the old, "It was the milkman" line, which was funny, because we really did have a milkman -- wow I'm old -- and he really did have red hair. One time a girl about my brother's age, then five or six, pointed to him and said, "I like him. He has red hair." And then she blushed and hid behind her mother. We had never seen them before and we never saw them again. I am tired of hearing, "I don't see color." If people can pick out red hair from a mile away, they sure as heck see skin color. If one of the first thing
2 comments
Read more
More posts